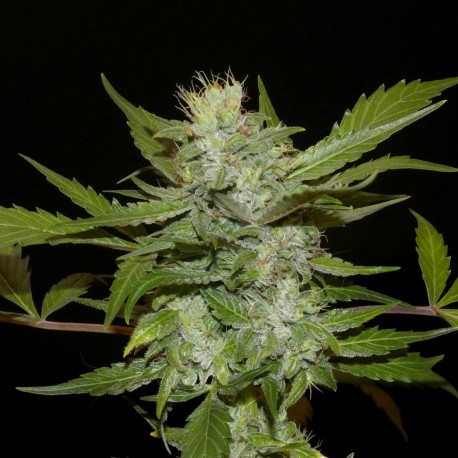 Hash farmers near the city of Sheberghan have been using this highly resinous Sheberghan hashplant landrace for making some exceptionaly sweet/fruity and very sticky hashish. Coming from a multicultural region legendary for its sticky/fruity sieved hashish, this cultivar is a true hash plant producing leafy buds covered in large resin glands.

Sheberghan was a settlement along the ancient Silk Road. The region is multicultural and has a rich history. Most inhabitants of the region are part of the Uzbek ethnic group. However, many other ethnic groups are also present.

Northern Afghanistan is renowned for producing some of the very best hashish in the country. Although more people have heard of Balkh and Mazar I Sharif, Sheberghan also produces a sieved hashish of exceptional quality.

The Sheberghan Hashplant soothes the mind and relaxes the muscles. Since it is a landrace full of genetic diversity, potency varies according to the phenotype. Therefore, the high can go from being mild to being quite powerful!

As with most hashplant landraces, the Sheberghan expresses a wide range of cannabinoids. Some specimens are CBD dominant, some are full spectrum with a balanced ratio of THC to CBD and others are THC dominant.

Most plants have a pleasant hashy/earthy smell with subtle notes of Skunk when flowering. Although the smell isn’t too pungent, the weed is very tasty which suggests a high sesquiterpene content. It is a very sweet taste that coats the mouth and throat and lingers for a while.

This easy to grow, beginner-friendly strain is a true hashplant landrace producing leafy buds covered in sticky trichomes. Not only the flowers but also most of the small leaves display a thick frosty coat of resin glands. Depending on the phenotype, the buds range from being moderately dense to very dense.

The plants are easy to manage both indoors and outdoors. Expect them to only double in size during the flowering stretch. On top of that, the Sheberghan hashplant produces incredibly strong sturdy branches that almost never need support.

Most of the plants display the typical broad Indica leaflets. However, some phenotypes can show rather narrow leaflets.

These plants are medium feeders. They require higher levels of nutrients than most landraces, though, not as much as most modern cannabis hybrids.

This Landrace can thrive even when the temperatures are very high or very low. Even though the Sheberghan hashplant can withstand important temperature variations, it requires the relative humidity (RH) to be low during the flowering phase. Indeed, fall season is very dry in the Jowzjan Province.

Landrace Genetics personally collected seeds in the Jowzjan Province near the city of Sheberghan in 2018. The Khalifa team has then worked on adapting this strain to growing indoors by reducing the hermaphroditism and decreasing the amount of undesirable phenotypes while preserving most of the genetic diversity. Landrace Genetics is an expert strain hunter specializing in collecting and preserving Afghan and Pakistani Landraces.

The Sheberghan is an easy to grow, beginner-friendly landrace that produces one of the highest quality hashish in the world.

9 other products in the same category: