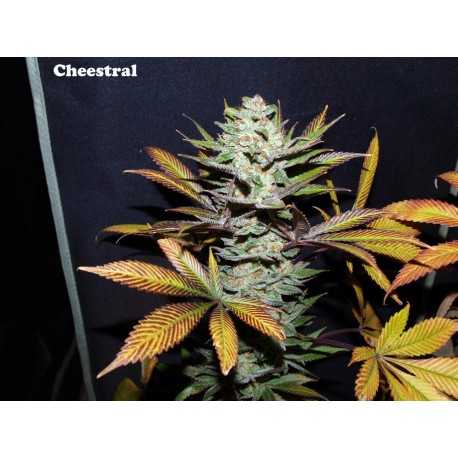 The mother of this cross is the famous UK Cheese, a selection of Skunk#1 genetics done by British Exodus Collective around 1989. Its success had been immediate and international thanks to its powerful, complex aroma and its first class euphoric effect, that quickly won the hearts of the entire cannabis community.

Cheestral's father is a male plant of the Pakistan Chitral Kush strain , a resistant and compact Indica line with red-purple colors, given to USC by CBG, after being brought from Pakistani mountains and bred during several generations.

Cheestral presents a compact but vigorous growth, and doesn't need more than 7-8 weeks of flowering to get ripe - tanks to PCK's influence - which also gives these fall colors to a proportion of plants, specially at the end of flowering.

3 other products in the same category: