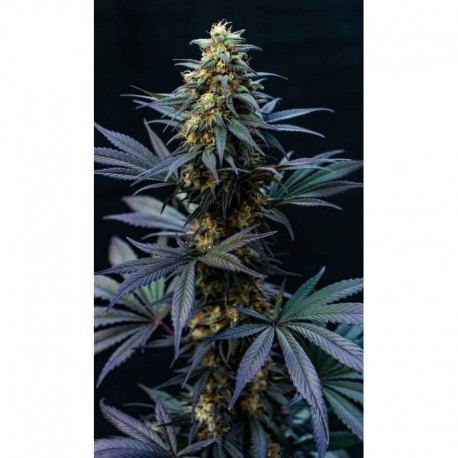 Black Lebanon is a feminised, indica-dominant and high-yielding cannabis seed strain. This version has been developed from the original Black Lebanon land-race hashish strain that was prevalent in the early 1980s and has been stabilised by crossing with a male Blackberry.

In order to achieve a stable strain as close as possible to the original those progeny that most closely aligned with the original Black Lebanon in terms of potency, flavour, effect and yield were chosen to be the breeding line for seed production.

Plants are quite squat, growing to a height of between 80 - 150 cm,m and will be dark green with most displaying purple and black colours towards maturity. Given its providence this strain withstands stress with hot and arid conditions. Trichome coverage and resin production is very high as befits a 'hash plant'.

Indoors flowering lasts for 60 - 65 days with yields of up to 500 gr/m2 possible. Outdoors, northern hemipshere harvests will be ready sometime during the middle of October.

The flavour is a little more fruity than the original, earthy/hash Black Leb. and the effect is potent, stoney and relaxing.

11 other products in the same category: