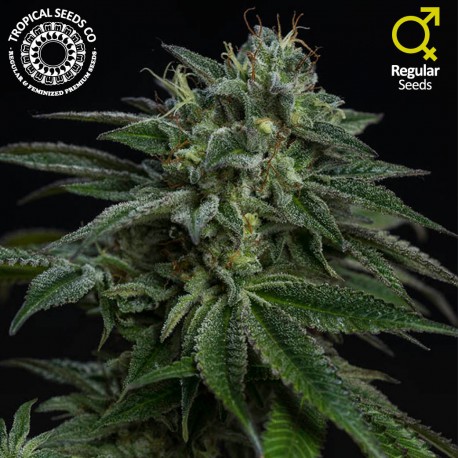 YOU CAN BECAME A CLUB MEMBER OF OUR TROPICAL ENTHUSIASTS CLUB HERE "LINK" AND GET MORE BENEFITS LIKE THIS ITEM WITH BETTER PRICE!

Pre98 Bubba Kush and Sour Diesel are hybrids from the United States and have marked a before and after in modern breeding separately and that still have much to contribute as has been seen in recent years, where many of the best current breeders are already working with them and we did not want to lose this great opportunity to work and offer these unique lines.

We received this incredible hybrid from one of the first collaborators of our medicinal project, Camacho, and current breeder of Therapy Seeds. The first tests evidenced the great potential that this hybrid had but also that it dragged some problems; some individuals showed pre flowers of both sexes, others did not have enough vigor and even in later tests we discovered that it had difficulty germinating without assistance. Even so, Charles who suffers from insomnia and hyperactivity discovered its usefulness for his pathologies due to its high THC content and its cerebral effect decided to continue with it for his own use.

We have been working this hybrid for some years, exposing the selected individuals to variations of environmental factors of temperature, predation, pH, humidity, photoperiod, availability of nutrients, etc. in order to find the best genes. After these first years we decided to take a first step in its commercialization, using two F2 males of different genotype and some females selected for showing the best potential of the hybrid in F2 and F3.

We are sure will not leave anyone indifferent, it is a hybrid of strong and branched structure that forms large super resinous buds of the highest quality. With super powerful brain effect, which has led us to name some individuals as a "Goosebumps" chemotype with very high concentrations of THC and Myrcene, which makes you super sensitive from the first puff and increases the libido, stimulating and enhancing sexual and energetic activities, a pleasure for all the senses.