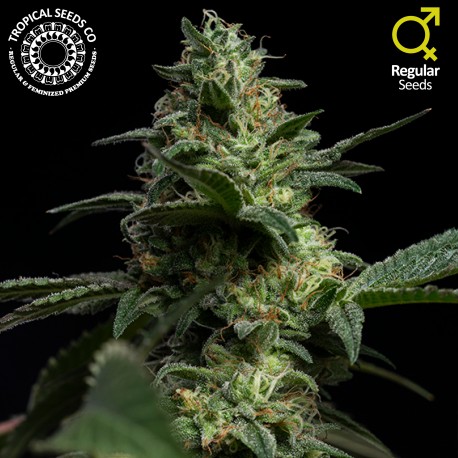 Buying a pack of these seeds you will receive a pack of a new hybrid, until stocks lasts.

When this project began, no one knew that this could end like this. It all started with our precious Black Sour, while Charles bred this line that he has always used for his hyperactivity and insomnia, thanks to its high THC and myrcene content.

Coincidences of life, he got into his hands a very exclusive package of Sherbet Gelato seeds, the pack said number 1 of 50. And we cannot say much about these seeds, they were not what was expected. This may actually be true since later this hybrid was not offered exactly the same by the seed bank. Two females we obtained, they were not strong and resistant plants, but when it was time to smoke them they did show a great quality.

The two females were completely different in scents, so partly without great hope, a cross was made with our best male Black Sour. Most of these seeds were given away during Spannabis 2019. And a few others were grown by Charles and sent to Argentina to a great friend, Julito Carlson. It was at that time that the Sherbet Gelato x Black Sour seeds would finally become the LoveShake project.

Resistant and strong plants, with fast-growing structures and a great facility to be cut because of its great capacity to generate roots. During flowering, both Charles and Julito had a great time selecting females, as they all presented high quality and it was a difficult process to choose. Although in the end, both were left with the sweetest phenotypes without losing the touch of myrcene and without a doubt, the large amount of thc that impresses in the quality of their smoke.

Somehow the best of both parents had been transmitted perfectly, just as a piece fits into a puzzle with its adjoining piece. While Charles was preparing the seed reproduction that we are now offering, LoveShake F2, Julito presented a sample of the flowers in the 1422 cup from Argentina, during the summer of 2020, the idea was to be able to compare the quality of the flowers obtained from this hybrid with other top competition hybrids. Well, maybe it was not the best result that could be obtained, but it was our best result in a hybrid that we have not been able to develop in its maximum splendor either, a very deserved second place for Julito with our LoveShake.

Perhaps it is not the style of hybrid that you are used to seeing in Tropical Seeds Company, but I assure you that the high quality of the smoke that is obtained will mark a before and after in our project. We want to offer a small batch of fresh LoveShake F2 seeds, along with some hybrids that we have used to make with the same males.

In these LoveShake F2 we have made an open reproduction between 3 of the best females and 3 of the best males that we have found. Thus, as a result we wanted to offer a wide range where you can choose the best for you or your project. Also, we received from a great friend, Mark Hardgrower, direct cuttings from Purple City Genetics of their wonderful Cuvee Cookies and Watermelon Zkittlez. We only have good things to mention about these two strains, a pleasure to grow and smoke them. And with all due respect, these were also crossed with our LoveShake males. As well as some Old Afghan NLD and some old Amnesia. In this pre-sale for VIP members, we want to offer you the possibility of getting our LoveShake F2 or these hybrids before anyone else and at an unbeatable price.