The importance of Male Cannabis Plant

The authentic cornerstone of Breeding: Local or Pure strains

Hi there fam ! We return and we bet all in with the Old Afghan NLD.

Three years ago we received about 100 seeds of this line from a reliable UK source who claimed that this line was the same that came to Holland in the 1970s. We had been looking for an open line of pure afghans for a long time, where we could study its wide genetic range.

I will not deceive you, even today seems hard to believe, receive the most worked pure line of history, but without being worked, a trully open line from Afghanistan. Most of the seeds were spent in being able to contrast this information and to begin to understand what we had in our hands. Aeritos and Charles realized the first tests of grow, the line didn’t seem anything special; long plants, thin leafs and long internode branches, little buds little bit tight but with enough resin. Wilder aromas with a medium energizing effect ended with comedown. Flowering times around 80 days, even some phenotype that was not able to bloom at indoors.

As it was unexpected, Charles didn’t know to react in time. For that reason, 12 days ago Charles began to germinate the last seeds that we have of old afghan. In total 17 seeds and sprout all: 17/17 very quickly and they have shown their vigor from their early days. The purpose is to find the best phenotypes and the best males to perform an open reproduction with the selected females too.

When we received the line was marked as the original Afghanistan of Sacred Seeds and for the studies that we have been carrying during 3 years, we can find a wide genetic range, you can find phenotypes very similar to those of the Kandahar area and other phenotypes more similar to Mazar-i-Shariff, so our conclusion is that you can find a gene mix from the northern zone of Afghanistan in this line, at the same time some phenotypes with long flowering or less adapted to the indoors could indicate that it would have been hybridized with some sativa, knowing a little the story could be some of the old hybrids of colombian gold x afghanistan or old sativas from afghanistan, but we can not guarantee it 100% because these phenotypes are not commonly shown.

With a sativa structure and a narrow leaf, it forms long colas that need to be held during flowering. Within the gene pool can be found mostly two phenotypes that bloom between 70-90 days, some with spruce tree structure and others more columnar. The bouquet is very sweet in the shorter ones with more narcotic effect being more citrus and old hashish in the longer ones with a richer effect providing a more active and witty start, ending relaxed and narcotic.

Old Afghan NLD long pheno, 80-90 flowering days. Incredible metallic, incense and church bouquet of aromas. Powerful high effect that elevates you and ends up leaving you on the sofa. 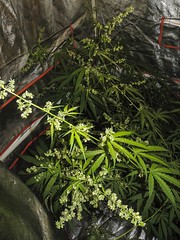 Get now these new freebies in all orders until stock lasts! 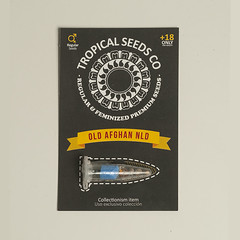 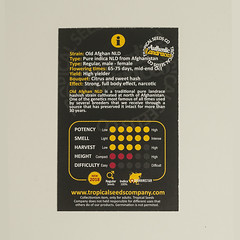 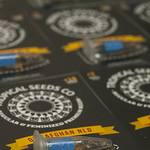